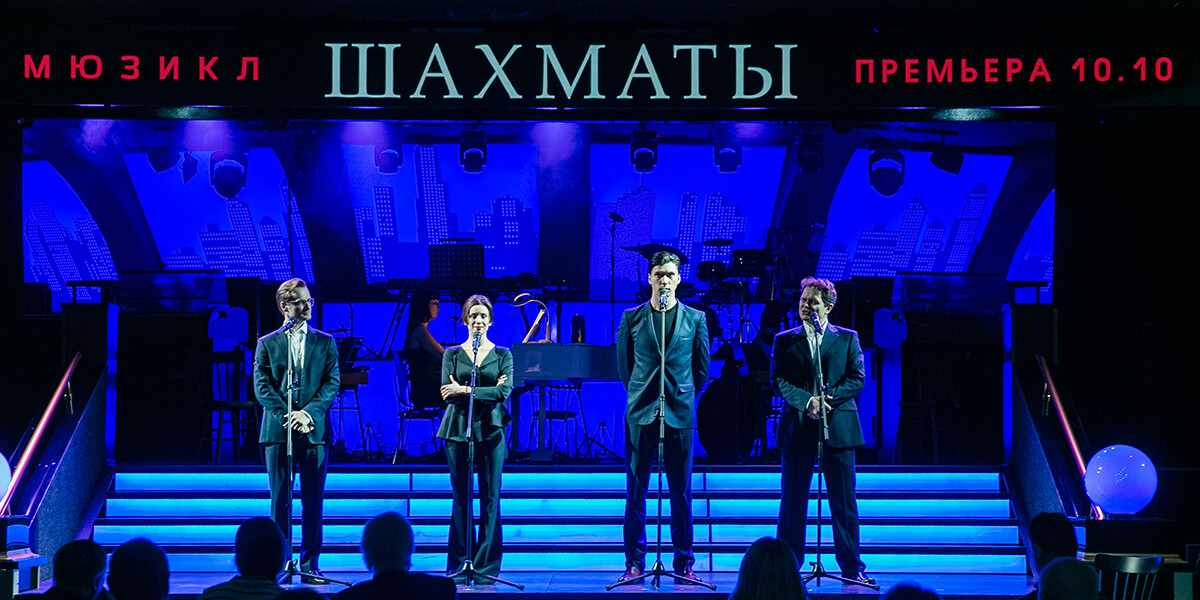 The presentation of Russian production of CHESS The Musical was held in MDM Theatre, Moscow. The show will open on October 10, 2020. Several songs from CHESS were performed in Russian language for the first time. Scenery 3D model and costume sketches were presented.

Sir Tim Rice — renown British lyricist, concept creator and author of CHESS libretto arrived in Moscow in order to attend the presentation. Alla Pugacheva, who was meant to perform a role of Svetlana back in 1984, as well as Anatoly Karpov, a multiple-time World Chess Champion, whose match with Viktor Korchnoy in Merano, Italy, in 1981, became a basis of the first act of the play, also attended the рresentation.

Rice, Pugacheva and Karpov greeted each other like good old friends: Soviet chess player and the British lyricist became friends right after the historical match in Italy. As for Alla Pugacheva, Sir Tim Rice, Benny Andersson and Björn Ulvaeus came to the USSR in 1983 to see her. The plan was for Pugacheva to originate the role of Svetlana in the first London production of CHESS.

“We all stood there — Tim, Bjorn and Benny — with tears in our eyes. I wanted to sing, but I knew I wouldn’t be permitted to go”; — commented Alla Pugacheva — “I needed to leave the country for 11 months to rehearse, and that was an equivalent to fleeing. I had a 10-year-old daughter and my parents. And I decided that maybe I would destroy my own destiny by refusing, but I would save theirs”.

At the presentation, Pugacheva was assured that the role of Svetlana that was once intended for her is in safe hands.

The famous song I Know Him So Well was performed in Russian language for the first time. This worldfamous composition is an example of a musical theatre song, which exploded international charts and remained at the top for several weeks; later, this one absolute hit will be included in repertoire by such mastodons of pop music as Whitney Houston, Spice Girls and Susan Boyle.

The producer of Russian production of CHESS Dmitry Bogachev noted:

“The are no heroes or villains in this story. Each character deserves understanding and sympathy, each has humanly understandable and explicable motives, and each is happy and unhappy in their own way. We will try to make our production believable and sincere, one that our smart audience will believe in”.

Among the guests of the presentation were Leonard Blavatnik, British billionaire and the Warner Music company owner, and Arkady Dvorkovich, the president of World Chess Federation (FIDE), who confirmed FIDE’s full support for the Russian production of CHESS.

At the end of the evening Sir Tim Rice took the floor:

“This presentation of CHESS one of the most exciting I’ve ever seen. And I can't wait to see the whole show. I did not dare to assume that I would ever see our musical in Russia”.

For the first time in Russia! Legendary musical CHESS
CHESS opens on Broadway in Moscow